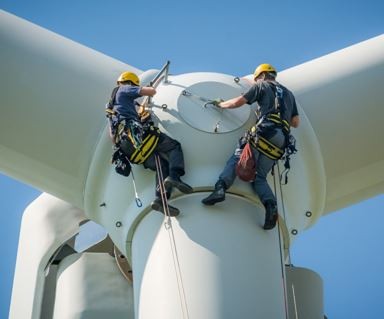 A challenge to reduce the assembly times of wind power generator couplings has halved the time and labour taken to do the job – and increased safety as well.

The Australian Technofast Industries hydraulic fastening company was asked by a US operation of a major European manufacturer to improve the efficiency of the operation to help meet burgeoning demand for its products.

“There are now more than 340,000 wind turbines on the planet, generating more than 700 GWe of power, and the total is increasing exponentially,” said Technofast CEO Mr John Bucknell.

“So any operation that improves efficiency and safety of production is very welcome and applicable to thousands of applications,” he said.

Technofast’s challenge was to develop an alternative to older methods of fastening – such as torque wrenches – to cut the assembly time of the shrink disc coupling which joins the turbine to the generator of the design involved.

The coupling consists of tapered components which are fixed using an array of bolts grouped together to make a friction drive designed to be capable of slipping under extreme load to protect the generator from damage in service.

Technofast produced a custom-engineered EziTite hydraulic bolt incorporating a flexible base, which allows the unit to absorb movement of the flange being bolted during assembly without damage to any part of the system.

“The operation – which is applicable to a wide range of applications in the power industry – used to take eight-to-ten hours using two crews of six-to-eight workers to do a consecutive torque tightening routine. So we have cut time and labour needs at least in half, while also solving the OHS issues of fatigue from holding up individual wrenches involved in the job. The large crews doing the job the old way needed to swap-out repeatedly because of the weights involved, a problem which has been removed.

The globally proven safety and labour-saving EziTite fasteners are simultaneously actuated to give accurate, even and time-saving torquing across sets of bolts. Releasing of the bolts for servicing is achieved equally, simply and simultaneously by releasing the hydraulic pressure used to stretch the bolt to achieve the exact torquing required (rather than twisting the bolts individually to achieve torquing). Applications of EziTite hydraulic bolts and nuts include motors and turbines, nuclear and conventional power plants, mineral processing, and construction machinery and structures.
.
“There is also a strong safety and reliability benefit in service in the completed wind tower, because 100% of the bolts incorporated into the wind generators are fastened to exactly the same tensions required. This helps optimise time in operation before service is required, which is obviously a major operation given the heights at which crews are working,” Mr Bucknell said.

To help extend the EziTite technology to wider use within the electricity industry, Technofast has introduced a 3D printer service – an exact but far less expensive lightweight plastic example of what interested parties need so they can trial the fitting before committing to any order of multiple fasteners made from high-strength metal.