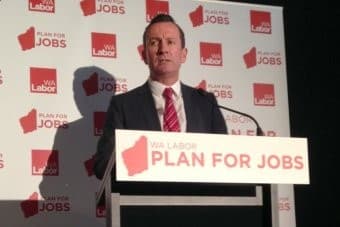 WA Labor has pledged to create 50,000 jobs as the party but does not provide costing for many of the initiatives.

The WA Opposition Leader Mark McGowan however unveiled the plan today, which promises to boost tourism investment by $425 million over five years, and put $17 million into the Science in Schools program.

He also said the party would also add $14.5 million into a New Industries Fund to encourage new businesses and start-ups.

Media were invited to cover the event but Mr McGowan was not available to take questions on the initiative after his speech.

Minister for State Development Bill Marmion said the Liberal National Party had introduced a local content policy for government projects in 2000, and that policy survived today.

"We have a strong plan to make sure that we create jobs in Western Australia.

The Western Australian Government is facing a record deficit blowout of $3.1 billion by the end of the financial year, as revenue from mining royalties declines.

Unemployment is likely to become a key issue in the lead-up to the March election in 2017.