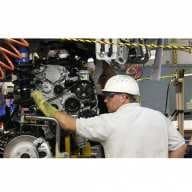 Britain's manufacturing output is growing much more rapidly than expected, according to latest industry data.

Output jumped by 1.9 percent in June – its fastest growth since July last year.

The Office for National Statistics (ONS) said in a statement all 13 components of the manufacturing index showed growth for the first time since June 1992.

Industrial production, including mining, electricity, gas and water supply -- increased by 1.1 percent in June from May, according to the ONS.

UK car sales grew at an annual 12.7 per cent for the month, prompting the trade industry group SMMT to increase its forecast for the year.

"June's surge in UK industrial production is the most convincing sign yet that the sector is sharing in the recovery already evident in the rest of the economy," said Samuel Tombs, an economist at the Capital Economics research group.

Recent official data showed that the British economy grew by 0.6 percent in the second quarter, cementing its recovery from recession.

Gross domestic product (GDP) grew by 0.6 percent in the three months to the end of June. This compared to a gain of 0.3 percent in the previous quarter and is the first time since 2011 that Britain has achieved back-to-back quarterly increases.