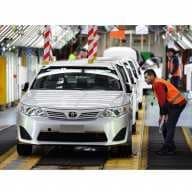 Toyota Australia will invest $123 million in its local manufacturing operations.

The investment will see Toyota Australia build a major facelift vehicle from 2015 and expand its supplier development program during the next five years.

The project is supported by a co-investment package from the Federal and Victorian Governments.

The Federal Government has contributed a grant of $23.6 million towards the investment with an undisclosed grant contributed by the Victorian Government.

In addition, the Federal Government will contribute $5 million towards Toyota Australia's $15 million supplier development program over a five-year period, allowing the program to be accelerated and intensified to assist companies that supply components to Toyota.

"Local manufacturing is an integral part of our business and is a key focus of our five year company-wide transformation program," Mr Yasuda said.

"The investment ensures that Toyota Australia continues to build high quality vehicles for our local and overseas customers."

Toyota Australia currently exports about 70,000 Camry and Aurion vehicles per year predominantly to the Middle East, with some exports to New Zealand and the South Pacific Islands.

The bulk of the funds – $108 million – will be spent at Toyota’s Altona plant in Victoria.

In addition to making the Altona investment, Toyota Australia will spend $15 million during the next five-year period on its supplier development program.

"This program will see a dedicated team of engineers working with local suppliers to assist them to improve productivity, diversify their business operations and improve their global competitiveness," Mr Yasuda said.

"This program will help strengthen Australia's supplier base through the application and sharing of Toyota Production System principles and best practice manufacturing techniques."

Mr Yasuda says it is vital to continue to have an ongoing partnership with Governments to ensure the long-term viability of local manufacturing.

“This investment was secured due to the enormous effort undertaken by many people at Toyota Australia during the past 18 months and the critical support of the Victorian and Federal Governments," he said.

Toyota has been building cars in Australia for 50 years. In 2013 the company expects to build more than 100,000 Camry, Camry Hybrid and Aurion vehicles at its Altona plant, along with approximately 108,000 four-cylinder engines.