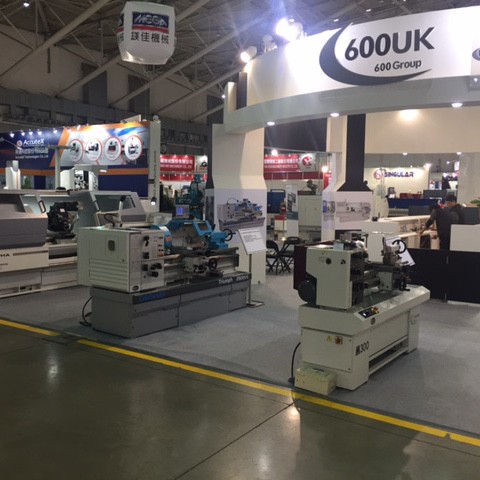 The huge exhibition known as TIMTOS has grown into a major drawcard for Australia’s workshop managers buying or monitoring the latest developments in engineering technology.

In today’s fiercely competitive export markets, Australia’s workshops in every part of the supply chain need to harness the right machine tools in order to retain parity with their rivals in terms of the three Ps – precision, productivity and price per component.

The UK-based 600 Group places high importance on its presence at the exhibition and, this year, had its top team demonstrating market-leading products from the UK and USA during early March.

The two Sydney-based executives introduced to current and prospective customers some of the Group’s top executives from the UK and USA. These included the new UK-based Group Managing Director, Terry Allison, and the Michigan-based global COO of the Machine Tool Division, Don Haselton, along with the Worldwide Product-Development Manager, Mike Berry, from the Yorkshire manufacturing complex.

The turn and mill sensation

Speaking from the Group’s stand at the show, Cliff Purser said: “The 600 team is focused on helping each customer at every turn, but that may change! Since the introduction of the all-new Harrison Alpha XC combination CNC lathe, we are now helping them at every ‘mill and turn’,” he said with a grin.

This machine caused quite a stir at MACH 2016, and there were very good reasons why so many workshop managers from all over Europe crowded the 600 Group stand at the National Exhibition Centre in Birmingham.

The highly versatile XC range now incorporates driven tooling and full c-axis interpolation. This feature, a significant addition to the simple-to-operate CNC Alpha lathe, now allows operators to carry out secondary operations at the machine in one setup.

Purser added: "Before TIMTOS, we previewed the XC to customers and distributors throughout the region, and they have welcomed the availability of a flatbed machine that can finish the parts in one hit – at a price they can afford.”

Following the enthusiastic reception for the breakthrough Alpha XC design, the 600 Group has created a short video, to demonstrate the capabilities and benefits of this combination CNC lathe. Visit https://www.youtube.com/watch?v=Lwh3t6XQnJE

Steve Drummond said that the annual Taipei International Machine Tool Show (TIMTOS) could be regarded as ‘the turning point’ in the Asia-Pacific region for the sale of the latest machine tools.

He said that the myriad of visitors to the company’s exhibit, including many from Australia and New Zealand, had expressed interest in two newly introduced turning machines.

He explained that the Colchester Triumph VS2500 variable speed manual lathe sets new standards of performance with its combination of electronically variable spindle drive and a constant surface speed option.

“The result is a cutting performance far superior to standard centre lathes and many CNC machines. Precision, power and durability have been built in to give many years of reliable performance from this heavyweight conventional lathe.”

The second newcomer caused some excitement among visitors from the training sector. The Harrison M300 centre lathe has been designed to allow easy control of its comprehensive capabilities, making it an asset in the toolroom, apprentice training, and secondary and tertiary education.

It has the power to deal with heavy metal removal, at the same time offering precision for fine tolerance turning, with routine servicing requirements kept to a minimum.

Drummond added: “The M300’s safety aspects meet all international standards, and include the latest European CE requirements, making this conventional lathe a valuable asset in any workshop.”

The 600 Group executives expected – and witnessed – a wave of interest in the range of milling machines from Clausing, a Group member based in Kalamazoo, Michigan.

In the spotlight at TIMTOS was the Clausing 2VS, a heavy-duty vertical mill that has two big brothers, and all three are formidable performers.

Don Haselton told visitors: “Right from the drawing board, the 2VS has been designed for power, precision, and versatility, and is able to handle most milling jobs. It is one of the heaviest in its class, and is equipped with a powerful spindle-drive motor and an infinitely variable speed drive that delivers a speed range of 60 to 4300rpm.”

The Clausing company offers a large range of powerful mills in its comprehensive range of machine tools, and these can be viewed on the company’s website at www.clausing-industrial.com.

When the Gripfast combination power chuck was introduced at the EMO exhibition in Hannover by 600 Group company, Pratt Burnerd, workshop managers from all over Europe crowded the demonstrations.

According to Cliff Purser: “It was the same in Taipei. Visitors could immediately see the time-saving advantages provided by the new design. Many were surprised when they saw that the Gripfast combines a chuck, a collet chuck, and a mandrel chuck in a single unit.”

He noted that the new chucks are supplied with a duplicate set of master jaws and simple off-machine jaw setting fixture, enabling the jaws to be preset off the machine, and ensuring a changeover time of less than one minute.

Since then, the world’s best chuck has been complemented by the Gripsafe gripmeter, which accurately measures and records chuck gripping-forces within seconds.

Drummond said: “Nobody wants to see a machine operator lose his head when a workpiece that is not securely held goes flying off the machine like an executioner’s axe.”

Happily, the Gripsafe is suitable for use on all makes of chuck, and has been developed to help customers comply with health and safety legislation, allowing them to ensure that their chucks remain fit for purpose.

Speaking from Taipei, Managing Director Terry Allison summed up the success of TIMTOS 2017.

“The 600 Group is a regular participant in this very important event. We are here because the Asia-Pacific region has excellent economic prospects, and is going through a process of expansion, modernisation, and widespread adoption of state of the art technology.”

“As usual, TIMTOS has attracted representatives of companies of all sizes in manufacturing and processing, not forgetting the education and training sector, and a cross-section of military bodies.”

“Without exception, all of them have found something of interest in the 600 Group exhibit, supplemented by videos on YouTube, and the team on the stand are confident of setting a new record for sales at TIMTOS and in the Asia-Pacific region.”