For a relatively young company, DGH Engineering has swiftly become one of Queensland’s most respected engineering enterprises, and a go-to supplier for the state’s mining, sugar, defence and ports industries. And it has achieved this status as much by the quality of its work as it has by the recommendations it has received from local industry leaders.

One of the key factors in its success has been the company’s insistence on providing a complete “one-stop-shop” service on engineering projects, and that has led DGH Engineering to make substantial investments in its own capabilities that today allow it to fully “own” the projects it works on, rather than relying on external subcontractors for key aspects.

Founded in 2005, the company’s mission is to provide quality engineering solutions through design, fabrication, construction and maintenance of assets and equipment.

Today, the company has fabrication workshops in both Mackay and Emerald and runs mobile engineering teams from both locations.

The Mackay site is the DGH Engineering headquarters, with a 3000m2 fabrication workshop, featuring four overhead cranes and 3 hectares of hardstanding area.

It was a recently as December 2013, that DGH began the move to bring machining capabilities in-house with the acquisition of local company JM Machining. And while the acquisition, complete with manual machinery and personnel meant that DGH was not setting up its machine shop in Mackay from scratch, the capabilities with which the shop opened in 2014 were limited by today’s standards.

Immediate expansion was required, so the company purchased two second-hand CNC machines in order to increase the throughput of the machine shop.

While the newly installed machines did increase the capabilities of the DGH Engineering machine shop, the reliability of the second-hand units proved to be less than perfect.

Dave Hackett is General Manager of DGH Engineering, and he admits: “We always knew the limitations of buying second hand – you’re generally buying somebody else’s problems!” So, with new personnel in charge, in the shape of Machine Shop Supervisor James Tabberer, the decision was made to upgrade and (in Dave Hackett’s words) “buy what we really wanted.”

Tabberer made a business case for purchasing a quality CNC lathe, and, as fortune would have it, the business expansion that this would entail made the company eligible for a grant from the Queensland Government.

Having drawn up a shortlist of CNC lathes from three different manufacturers and assessed the overall packages available, the decision was made to go for a Doosan Puma 5100LYB from Hare & Forbes Machineryhouse in Brisbane.

Hackett explains: “The Doosan wasn’t the cheapest – nor was it the dearest – but the package had everything we needed.” And Tabberer adds: “We knew that a machine like that could cost us a lot of money if it wasn’t running, so reliability and support availability were key factors in the choice.”

The Puma arrived during the second half of 2018, and was immediately put to work on longwall shear pins – a job that the previous machinery had struggled with.

With the new Puma more than earning its keep, James Tabberer could see another gap in the armoury of the DGH Engineering machine shop. He needed a quality CNC machining centre that would not only complete his existing workload more quickly and with greater precision, it would enable him to bid for new work and effectively open up new fields.

Inside the Doosan Puma 5100LYB

Doosan offers a range of different capabilities in its machining centres, and the best fit for DGH Engineering was the DNM 6700 machining centre. With its high spindle speeds up to 12,000rpm, Tabberer saw a machine with true multi-materials capabilities that would cater for the company’s increasing demands for machining aluminium and plastics in addition to steel.

And with that machine delivered in early 2019, DGH Engineering did start to feel like the “one-stop-shop” that it had set out to become.

Says Tabberer: “We really feel that the new machines have given us a competitive advantage. Rather than subbing out certain jobs, we’re doing it all in house, and that means we’re fully in control of the tolerances and the quality of the finished product. And that’s not even mentioning the dangers of damage to subcontract work in transit.”

The addition of the two Doosan CNC machines, however, did create a problem for DGH Engineering: the machine shop was effectively full.

The company’s response to this problem was typical of its “one-stop-shop” ethos: double the size of the machine shop… and do it yourself. 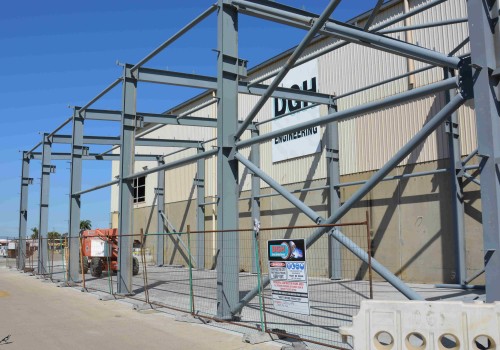 The extension will be completed by the end of 2019, at which point James Tabberer will be making another business case, probably he says for a CNC boring machine to occupy some of the newly found space. Why? “Well, there are a couple of boring machines around Mackay…. And they’re always busy!”

No doubt, the expansion will cause further recruitment problems for the company. There simply aren’t enough qualified CNC operators in the region, and both Hackett and Tabberer despair of the lack of training available locally, and have been campaigning for the local TAFE to take a serious approach to CNC training.

“And we see how poorly trained so many of the younger workers are by the inadequate documentation we receive with some of the work we still have to subcontract out,” says Tabberer.

In the meantime though, Tabberer is ensuring that his prize machines are kept in top working order with a rigorous regime of weekly, monthly and quarterly preventive maintenance, backing up the annual service provided by Hare & Forbes Doosan technicians.

And while Mackay is not exactly close to the Hare & Forbes base in Brisbane, the company has been very successful in supplying Doosan CNC machines to several companies in the “sugar city”.

“So we do have a handy little Doosan club locally, which certainly helps keep the travelling costs down for the technicians when the come out to see all of us!” Tabberer concludes.