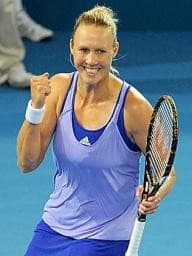 The campaign will include sponsorship of a range of tennis events over summer, highlighting the importance of supporting Australian growers and manufacturers as well as Aussie athletes.

“I’m delighted to be supporting the Australian Made Campaign. Buying Australian-made and Australian-grown for our children keep them healthy and also ensures local job and career opportunities,” Ms Molik said.

The events include the Australian Made Foundation Cup, an interstate tennis challenge for children 13 and under from rural and regional Australia.

Other events include the 25th annual Fed Cup Foundation’s Breakfast with the Stars events in Sydney and Melbourne, which promote the achievements of women in tennis.

“The Australian Made Campaign is all about ensuring a better future for Australians, particularly for young Australians and generations to come. Regional Australia plays a very important role in that future, said Australian Made Chief Executive, Ian Harrison.

“We are proud to align the Australian Made, Australian Grown logo with a Foundation that is working towards those same goals.”

Australian Made and Fed Cup Foundation will award the most outstanding male and female player, based on performance and sportsmanship, $1000 each to assist with their tennis development.

“We are proud to support the children of regional and rural Australia and to celebrate the achievements of women in tennis,” Mr Harrison said.

The Foundation Cup has been running for 13 years and has included some of the sport’s finest young players in recent years including Junior Wimbledon Champion Luke Saville and Fed Cup player Jessica Moore.

“Rural Australia has produced some of the biggest names in our sport including Margaret Court, Rod Laver, Pat Rafter and Evonne Cawley, said Judy Dalton, President of the Fed Cup Foundation. “I am confident that Australian tennis champions of the future will have competed for their state in the Australian Made Foundation Cup. I’d like to thank Ian Harrison and the team at the Australian Made campaign for their investment in the future of these Australian children.”

The Australian Made Foundation Cup will be played at Parramatta City Tennis Complex from January 7-11 next year.

Breakfast with the Stars, presented by Australian Made, will take place at the Apia International Sydney, on January 8 and in Melbourne at the Hilton on the Park on January 15.