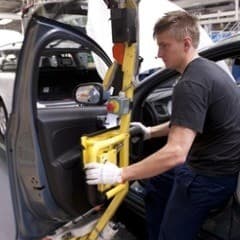 Despite warnings that it can be detrimental to health, many Australians are working a 50-hour week in order to get more done.

A study published last month involving 600,000 people found those of us who clock up a 55-hour week will have a 33 percent greater risk of having a stroke than those who maintain a 35- to 40-hour week.

With this in mind, Sweden is moving towards a standard 6-hour work day.

Businesses across the country have already implemented the change and a retirement home has embarked on a year-long experiment to compare the costs and benefits of a shorter working day.

"I think the 8-hour work day is not as effective as one would think, said Linus Feldt, CEO of Stockholm-based app developer Filimundus.

“To stay focused on a specific work task for 8 hours is a huge challenge, he told Fast Company. “In order to cope, we mix in things and pauses to make the work day more endurable. At the same time, we are having it hard to manage our private life outside of work."

"We want to spend more time with our families, we want to learn new things or exercise more. I wanted to see if there could be a way to mix these things,” he said.

To cope with the significant cut in working hours, Mr Feldt says staff are asked to stay off social media and other distractions while at work and meetings are kept to a minimum. "My impression now is that it is easier to focus more intensely on the work that needs to be done and you have the stamina to do it and still have energy left when leaving the office," he told Fast Company.

The thinking behind the move is that because the working day has been condensed, staff will be more motivated and have more energy to get more done in a shorter period of time.

Mr Feldt reports that not only has productivity stayed the same, there are less staff conflicts because people are happier and better rested.

No doubt Filimundus was looking at the several Toyota service centres in Gothenburg, which switched to a six-hour day 13 years ago and report happier staff, a lower turnover rate, and ease in enticing new employees to come on board.

"They have a shorter travel time to work, there is more efficient use of the machines and lower capital costs – everyone is happy," said managing director Martin Banck, adding that profits have risen by 25 percent.

Last February, a Svartedalens retirement home in Gothenburg implemented a 6-hour work day for their nurses with no changes to wage, and will be running the experiment till the end of 2016 to figure out if the high cost of hiring 14 new staff members to cover the lost hours is worth the improvements to patient care and employee morale.

"The Svartedalens experiment is inspiring others around Sweden: at Gothenburg’s Sahlgrenska University hospital, orthopaedic surgery has moved to a 6-hour day, as have doctors and nurses in two hospital departments in Umeå to the north," The Guardian reports.

While impressions of staff being happier and full of energy aren’t exactly scientific basis for declaring 6-hour work days as “better” than the 8 hour work day endured by the average Australian, there is evidence that what we’re doing right now isn’t working.

A study published in The Lancet last month analysed data from 25 studies that monitored health of over 600,000 people from the US, Europe, and Australia for up to 8.5 years found that people who worked 55 hours a week had a 33 percent greater risk of having a stroke than people who worked a 35-40 hour week, and a 13 percent increased risk of developing coronary heart disease, while a separate study found that working 49-hour weeks was associated with lower mental health, particularly in women.

And we probably shouldn’t be forced to clock on at 9am anyway, with expert Paul Kelley from Oxford University’s Sleep and Circadian Neuroscience Institute saying that society is in the midst of a sleep-deprivation crisis, because our 9-5 working hours are at odds with our internal body clocks.

"Staff should start at 10am … staff are usually sleep-deprived," Mr Kelley. "Everybody is suffering and they don’t have to. We cannot change out 24-hour rhythms."