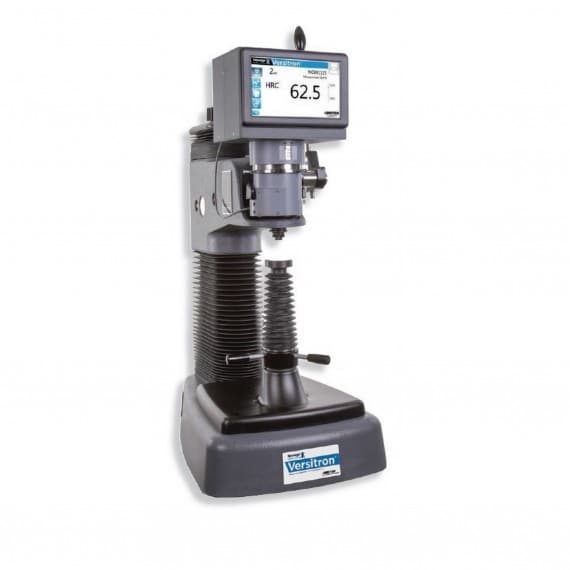 The Versitron Series is a unique and exclusive hardness testing system, which provides its users with the benefit of the top-loading and test surface referencing technology.

Applying both the pre-load and full load in one test cycle makes it possible to perform a test in as little as 4 seconds.

This hardness testing machine distributed by Bestech Australia is ideal for applications ranging from high volume to sampling, from production floor harsh environments to the lab and from testing awkward shaped parts to precise small part testing applications.

The clamping ability is an inherent part of this Rockwell hardness tester and provides the user with the ability to clamp and hold parts in place prior to testing with up to 325 Nm.

By clamping instead of using jack screws or cutting specimens, the test accuracy is improved and the testing time is decreased.

Because the removable clamping shield protects the diamond indenter from being struck by the specimen during handling, damage caused by test samples shifting under load is prevented.

The unique and intelligent indenter shroud secures that the test surface reference is constant and remains unaffected by dirt or foreign objects. The shroud senses the position of the indenter relative to the test surface when the preload has been applied.

A hair under a test block can completely ruin most test results but the Versitron remain accurate.

Test results are shown in a large font size making them easy to read.

The display is dirt and oil resistant and is easily cleaned. The BT130 interface is designed to last in even the harshest environments.

With only a few buttons to push the user is offered an easy access to histograms and statistical summary reports with an optional printer.

The Versitron hardness tester can take on heavy duty work while at the same time offering its users easy access to on-screen test results, such as x-charts, ranges and min/max, during the test. The Versitron is built to last in even the harshest environments.

The Versitron hardness testing machine is known as the “Industry Workhorse,” as earlier models have lasted for more than 30 years and is still running smoothly.

The entire load system is modular and self-contained within the test head. The test head can easily be exchanged to measure different Rockwell scales.

Electric and pneumatic drives can be controlled with either a pushbutton or footswitch.

Test results can be exported directly to DataView for further analysis or as a CSV file.

The Versitron hardness testing system is CE marked and complies with ASTM E-18, DIN, EN, ISO and other applicable standards.

·       Heavy-Duty Clamping
Jack rests are eliminated. Specimens weighing up to 325 Nm can be clamped in seconds.

·       User Friendly and Tactile Design
The icon driven colour display and the tactile button interface makes this hardness tester easy to use while at the same time it is built to last for decades in even the harshest environments.

·       Protect Your Diamond
The removable clamping shield protects the diamond indenter from damage due to accidents such as those caused by samples shifting under load and contacting the diamond.

·       Fast and Easy – tests are performed in as little as 4sec, even on manually activated testers. Minimal operator training required.

·       Accuracy is maintained. Errors due to vibration or dirty environments can be eliminated.

·       Configure your testing system based on your needs today, but with the flexibility to update tomorrow.

·       Modular test heads can be easily removed, for example for calibration or for upgrading the embedded software with the latest features.