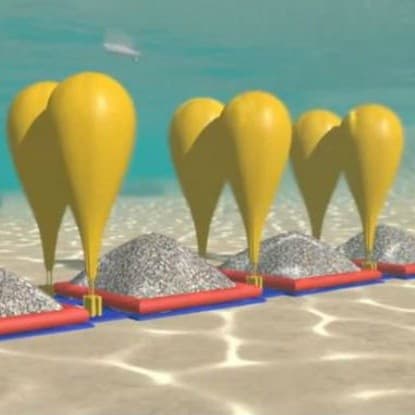 To combat the issue that faces renewable energy usage and storage, Canadian startup Hydrostor has created a system of pressurised water balloons.

These balloons are able to store renewable energy when availability dips such as during the night, which aims at reducing the need for diesel or gas as a back up option.

According to the company the solution will last twice as long as batteries that are available today, and at a fraction of the cost.

The initial facility will be set up in Toronto’s Lake Ontario, which is expected to be able to power up to 330 homes with the flexibility of an upscale. The set up will include a series of balloons, technically known as accumulators, are 55 metres under water and connected to the power grid via a pipeline.

The balloons are made out of the same material that raises sunken ships from the ocean floor.

"It's finding places to store the air that's been the problem [and] why it hasn't been massively adopted. We open it up to thousands more sites because we use hydrostatic water pressure." He continued.

The secret of the balloons is compressed air, which lie at the heart of the system. The extra energy is converted into compressed energy by the Hydrostor's proprietary technology.

When needed the pressure of the lake is used to pump the air back to the surface, which drives a turbine and generated energy as it goes along.

"We're now focused on commercialising this technology globally to bring our green energy storage solution to countries around the world," said VanWalleghem.

"The G20 is talking about getting off fossil fuel by 2050. To do that, our electricity system has to incorporate storage so we don't need as much backup diesel and natural gas capacity - that's what this can do."