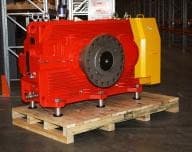 Eight sizes … the Mining Drive is available as part of a complete drive assembly, incorporating gear unit, motor, drive base and guardings

Leading drives solutions group, SEW-Eurodrive, is continuing to slash gear-unit turnaround times with the launch of its Australian-assembled Mining Drive. The Mining Drive will be assembled at a newly acquired state-of-the-art Industrial Gears (IG) facility next to SEW’s national headquarters in Melbourne.

The new facility will give Australian industry unrivalled gear-unit access, choice and flexibility.

The Mining Drive features bevel-helical technologies and is suitable for motor powers up to 1500 kW.

Assembled with a purpose designed thermal housing, the Mining Drive is set to make a significant reduction to energy usage in heavy industry through the lessening of thermal losses. With torque ratings ranging from 58-465 kNm, local-assembly of the Mining Drive will include eight sizes, taking torque range assembled to 175,000 Nm.

SEW-Eurodrive’s new IG facility, measuring 10,000sqm, is being fitted out to assemble and service the largest drives available in Australasia.

The fit-out includes cranes capable of handling 50 tonne loads and a storage capacity in excess of 3000 pallets.

The grand opening of the facility will coincide with the company’s 30th anniversary celebrations later this year.

“Increasing our local assembly capability will provide a real advantage to Australia’s industrial and mining sector,” said SEW-Eurodrive National Industrial Gears Product Manager, Ian Tribe. “We are continuing to enhance our technological edge and enviable track-record of local assembly capabilities, to provide users with fast-tracked drive solutions. It’s this ability to provide a locally-assembled end-to-end drive solution in quick time that differentiates us from our competitors.”

According to Tribe, the Australian-assembled Mining Drive boasts a modular design and is assembled from a range of standard components.

“The modularity of the Mining Drive allows for shortened delivery times, as units are assembled from stock parts,” said Tribe. “Unlike gear units manufactured overseas, the Australian-assembled Mining Drive can be supplied in just a few weeks, allowing users to streamline their own projects timelines.”

Tribe explained that along with the purpose-designed cast-iron housing, the Mining Drive incorporates several internal energy reducing features that are selected specifically for each application, depending on the operating conditions.

“These features result in less heat to be dissipated by the housing,” he said. “The special housing is then designed with larger dimensions and extensive ribbing on both sides and underneath in order to dissipate the heat that is generated more effectively.”