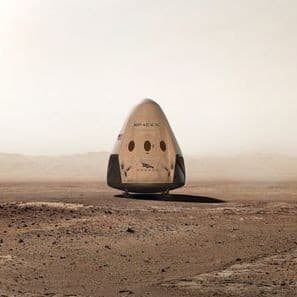 Not content with the pace of progress, startup SpaceX has revised their predictions for an unmanned Mars landing, aiming to land their Dragon craft as soon as 2018.

Despite being vague on details, the company has hinted at upcoming tests of the Red Dragon craft, a modified version of the Dragon spacecraft that it currently uses to shuttle goods and material to and from the International Space Station.

The Red Dragon has a large problem to overcome, however. It’s not getting to Mars that’s the problem: it’s landing safely.

Unlike Earth’s, Mars’s atmosphere is very thin (about 1/100th the density), meaning slowing and landing any sort of craft (via gliding or ablative cushioning) becomes much harder.

Several solutions have come up, but the solution Red Dragon currently sports is propulsive landing, or using rockets to slow its descent in a controlled manner. This does increase the fuel load of the ship, but is much more feasible than the inflatable lander that has previously been tested.

In the long-term, SpaceX’s goal is to colonise Mars, but it’s producing plenty of fascinating engineering challenges (and answers) in the meantime.