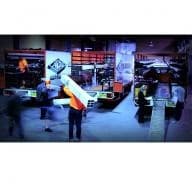 Ace Gutters has built a well-earned reputation as a leading manufacturer and supplier of the highest quality rainwater products.

From humble beginnings in a backyard garage the company now occupies a 2ha site at Mortdale in southern Sydney and employs some 190 staff.

When asked the reason for company’s outstanding success, CEO Don Anderson does not hesitate.

“Our staff,” he says proudly. “They have made our business what it is today.”

Don is exceptionally proud of the business his father Fred established in 1953 from a large garage at his home in Beverley Hills in southwestern Sydney.

This year marks the 60th anniversary of the family-owned company.

“It’s a real milestone, says Don, who has been with the company for the past 48 years.

“I’m very proud of what we have achieved, he says.

While many Australian manufacturers have been “doing it tough” in recent years, Ace Gutters continues to grow from strength to strength.

It is an amazing success story.

All manufacturing of its guttering and downpipes is carried out on site.

“My father was originally an electrical contractor, says Don. “He was very good at making switchboards. He invented a product where he actually flattened conduit.

“Until then all conduit was round which meant that when an electrician had to chase down a wall they had to dig a pretty big hole. “So who worked out a way to roll it flat which meant you didn’t have to dig the hole back so far and this was a great success.”

He used a brake press to make the wiring duct, but realised it could be better utilised. He hit upon the idea of guttering and thus Ace Gutters Pty Ltd was formed in 1953 in partnership with two other people.

Fred began making quad gutter, a generic profile and a popular one at the time. The factory premises in Hearne Street Mortdale were extended in 1957, as more space was required.

Once again he wanted to make more with his equipment and he came up with a new and innovative profile of guttering.

In 1958, he named this new profile, "Nu-Line" gutter. It was a brilliant idea that made the need for fascia boards unnecessary. This was put on the market in January 1959 and quickly created great interest in the building industry. The business went well and soon after Fred bought out both the other partners.

Sales went so well that the brake press could not keep up with the demand so a Roll Form machine was purchased in 1961 and was soon rolling out lengths of Nu-Line gutter up to 15.5m long.

At the same time the Company was having difficulty in obtaining sufficient capital to sustain the rapidly expanding business.

“It was growing so quickly that it became too big and Dad had trouble funding it,” says Don.

Fred searched for and found another partner, Dr Morven Dan, to whom he sold half the business. That partnership was a great success.

Fred Anderson died in 1993, leaving the business to his family.

Don has been with the company since 1965 and during that time he has acquired an in-depth knowledge of how the business functions, the challenges in today's marketplace and the need to grow and evolve with an ever-changing industry.

Dr Dan remained on the Board until his death last year, aged 96.

Today Ace Gutters is a leader in its field, offering a full range of guttering and drainage systems.

It now has branches in Sydney and Melbourne and continues to grow.

Last year the company established another new branch at Nowra, on the NSW southcoast.

There are 12 employees who have been with the company for more than 30 years service and numerous employees with 10 years or more service.

A large honour board in the foyer pays tribute to their commitment and dedication.

Don has no doubt this is the key to the company’s success.

“You’ve got to look after your staff and treat them correctly,” he says.

“It’s not always about money. “How you talk to them and treat them is very important.”

“For any business to thrive you have to attract the right people. You need people who know how to manage their different areas.

“We have built an outstanding team around us – you can’t do it alone.”

With a large fleet of trucks on the road each day, the company offers same day service for most standard orders in the metropolitan area and within 24 hours for regional areas.

The main point of difference?

“We just concentrate on the one thing (gutters) without getting too far off track, says Don. “We could have branched off into other areas, but I always resisted that.”

Also, Ace Gutters has an exceptional record in delivering orders “correctly and on-time.”

“Our mistake rate is about 1 per cent, which is fantastic.”

Don Anderson says he has never been tempted to take the “cheaper” option and manufacture off-shore.

“It’s very important to have our manufacturing process in Australia, says CEO Don Anderson. “That way we can have full quality control. If it was all done overseas we couldn’t keep an eye on it.”

Ace Gutters prides itself on quality and attention to detail. The company boasts its own laboratory carrying out extensive R&D to ensure its products comply with the strictest Australian safety standards.

Ace Gutters is a company renowned for “pushing the boundaries.” It constantly seeks new products and new designs.

So what does the future hold?

“We will continue to give customers the highest possible level of service, says Don.

“They can be assured that when they buy from Ace Gutters they are buying innovative, quality Australian Made products.”