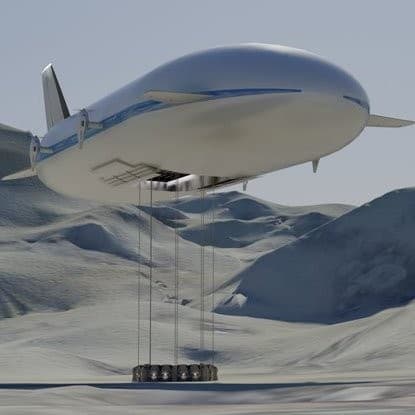 Production has begun on the Aeroscraft ML866, the world’s largest aircraft.

Built by California-based airship maker Aeros, the ML866 is 169m long and stands 36m tall, with a wingspan of 53m.

The blimp has entered a “design freeze,” with the company now focused on building the airship’s patented buoyancy system, called COSH (control-of-static-heaviness).

“We are excited to reveal production is underway on the ML866, and committed to achieving FAA operational certification for the first deployable Aeroscraft in approximately five years,” said Igor Pasternak, Aeros CEO, in a recent media release.

While it’s definitely exciting to think massive airships like the ML866 will soon take to the skies again, it’s unlikely we’ll get to go along for the ride any time soon.

The Aeroscraft blimps are intended for cargo transport purposes only, with VTOL (Vertical Takeoff and Landing) capabilities specifically designed to enable the lifting and deployment of heavy payloads in environments that don’t have runways or other forms of critical aircraft infrastructure.

Capable of carrying close to 60 metric tonnes in cargo, the ML866 follows successful testing of a half-scale prototype called Dragon Dream in 2013.

If all goes well with the full-size ship, Aeros plans to build even bigger aircraft down the line.

The proposed ML868 at 230m long would dwarf the already huge ML866 while carrying up to 181 tonnes. Another future concept, the ML868X, may carry payloads over 450 tonnes.

Unlike the infamous breed of mid-20th-century airships that used highly flammable (and thus extremely dangerous) hydrogen for their lift – most spectacularly demonstrated by the Hindenburg disaster in 1937 – contemporary airships use helium, which is less buoyant but a lot safer.

The ML866’s buoyancy control uses a system where helium compression can be increased or reduced depending on the scenario, enabling the airship to be heavier-than-air during ground operations or lighter-than-air during flight, with its makers likening it to a “flying submarine” in terms of its manoeuvrability.