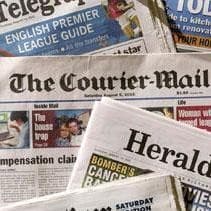 Mr Reid reportedly told a recent gathering of News Corp executives and senior editors that there would be renewed attention on the print side of its business and we should all be wary of digital sites parading as a valuable new service.

Reid’s comments were published in the News-owned The Australian.

He reportedly said that although the likes of Facebook and Google offered an exciting way to interact with an audience, they could easily be manipulated for evil too.

“Facebook is not a media company and Google says their intention is to do no harm, but they don’t really care when others use their channels for evil and they don’t take enough responsibility for it,” Mr Reid was quoted in The Australian.

Reid reportedly told senior executives that there would be renewed focus on its stable of print products that includes The Australian, The Daily Telegraph, The Courier Mail and The Herald Sun. He reportedly said he wanted the journalists and commentators to take a bolder stance.

Reid believed print newspapers had weathered the digital storm, had survived and found their place. He likened the “print is dead” mantra to the same argument 50 years ago when everybody was saying TV would kill off radio.

“My contention is if the digital revolution was going to kill ­papers, it would have already done so, but I think the world is coming to understand the incredible duty that a paper performs in its society,” he said.

Rather than adversaries, Reid believed that print and digital should work hand-in-hand – print uncovers the stories and digital facilitates the conversation. He cited figures that show three-quarters of the monies to newspaper businesses still come from its print editions.