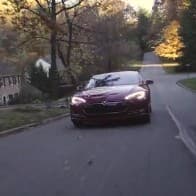 Tesla’s Autopilot feature is turning out to be much more than just an augmented cruise control, as the safety features and advanced sensor suite demonstrate in the video.

"I actually wasn't watching that direction… I became aware of the danger when Tessy [my car] alerted me with the 'immediately take over' warning chime and the car swerving to the right to avoid the side collision,” wrote the driver, Joshua Brown.

Outlets have tended to focus on the more dramatic theme of driverless crashes, despite only a single crash being the fault of the driverless cars.

Reviews and test-drives of the new family-oriented Model S are showing that drivers are becoming more and more comfortable driving with the automated features, and initial concerns about reliability quickly fade with use.