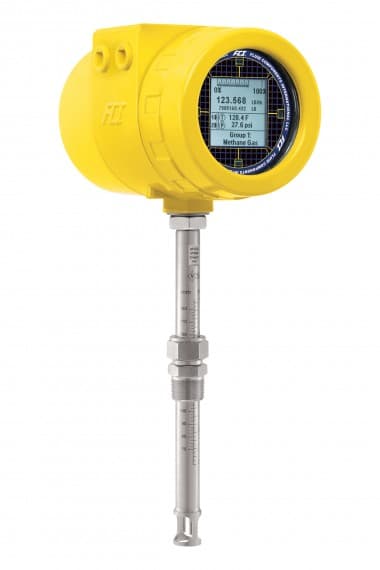 The engineers at the electric power plant were experiencing problems with inconsistent measurement of the vaporised NH3 injected into their flue gas as a means to reduce NOx emissions. The original system utilised a volumetric flow sensor, which wasn’t well suited for controlling the NH3 gas injection system. Switching to the mass flow sensing ST100 series meter, as opposed to taking a volumetric measurement, solved the false readings issue.

Given the ST100 flow meter’s standard wide flow turndown ratio of 100:1 (up to 1000:1 based on application), and the ability to measure mass flow, instead of volumetric flow, the engineers decided to conduct a pilot test. They installed the insertion style ST100A thermal flow meters on the primary vaporised ammonia feed lines to their nozzle grid for the test.

With the resulting improved measurement reliability, they took the project one-step further and installed in-line style ST100AL thermal flow meters at each of their nozzle locations. After proving out the benefits in one operating unit, they eventually instrumented the ammonia injection systems for all of the units within the facility.

The ST100 meter can be factory calibrated to measure virtually any popular process gas as well as mixed gases. The technology is suitable for use in wet and dirty gas applications, having no small ports prone to fouling. The basic insertion style air/gas meter features a thermal flow sensing element that measures flow from 0.07 NMPS to 305 NMPS with accuracy of ±0.75 percent of reading, ±0.5 percent of full scale. The basic in-line style meter is available for 2-inch and smaller line sizes.

The ST100 series meter’s transmitter is unsurpassed in meeting both a plant’s current and future need for outputs, process information and communications. Whether the output required is traditional 4-20 mA analogue, frequency/pulse or advanced digital bus communications such as HART, Modbus, PROFIBUS, or FOUNDATION Fieldbus; the ST100 Series will meet your instrumentation integration needs. Its advanced bus communications are all third party certified and registered.

Developed with a graphical, multivariable backlit LCD display, the ST100 series meter brings new meaning to the term “process information”. Its sophisticated readout continuously displays all process measurements and instrument status for easy on-site viewing by technicians, and it has the ability to query for service diagnostics via an integral, optical HMI that does not require declassification of hazardous areas.

Designed for extreme industrial process and plant conditions, the ST100 meter can be used in service up to 454ºC and is available with both integral and remote up to 300 metres electronics versions. The ST100 meter is agency approved for hazardous environments, including the entire instrument, the transmitter, and the rugged NEMA 4X/IP67 rated enclosure.