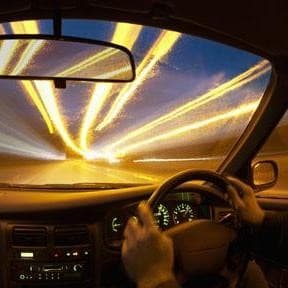 Driver fatigue is a leading cause of fatal car crashes around the world.

In Australia, it's estimated to account for between 20 and 30 percent of all road deaths, with people four times more likely to be involved in a serious collision while driving during normal sleeping hours – between 10 pm and dawn.

To help lessen the road toll and save people from avoidable accidents, researchers around the world have been trying to develop systems that can alert drivers to the signs of sleepiness before it's too late.

Now, a research team from the University of Technology, Sydney (UTS) says it's close to finalising a multi-device drowsiness-detection system, which uses in-car sensors and wearable technology to read physiological clues, like heart rate and muscle activity.

Complex algorithms can be used to predict fatigue and accurately warn drivers if they're at risk of nodding off.

"With our hybrid system, we are hoping for accurate driver fatigue predictions of 90 percent or more, which would be really ideal, without alerting the driver falsely," neuroscientist and transportation safety expert, Sara Lal, said in a UTS:Science media release.

"Our system will also focus on their physiological signs, using devices such as a wristband that can monitor cardiac action, video cameras and seat and steering-wheel sensors."

Most major car manufactures have developed detection systems that alert drivers to drowsiness via audible signals or text messages.

Some are even linked to GPS systems to show the driver where the nearest rest stop of coffee shop is.

But the majority of these systems tend to focus on how the car is behaving – is it swerving or moving erratically – or whether drivers are showing visible signs of fatigue, such as closing their eyes or nodding their head, the UTS:Science researchers say.

Rather than looking at visible indicators, the UTS:Science system tries to predict fatigue by detecting subtler physiological signs symptomatic of sleep.

"We want to alert drivers about fatigue before it happens. If you're nodding off, it's already too late," Ms Lai says.

Fatigue can impair judgment, reduce attention, and cause much slower reaction times, ultimately leading to poorer performance behind the wheel.

A study conducted by the Adelaide Centre for Sleep Research in Australia found that someone who has been awake for 17 hours faces the same risk of crashing as someone with a blood alcohol content (BAC) reading of 0.05 g/100 ml.

It means they're twice as likely to have an accident as an unimpaired, well-rested driver.

In that same study, researchers showed that being awake for 24 hours resulted in driving performance on par with someone who had a BAC of 0.1 g/100 ml – double the legal limit in Australia.

And microsleeps of just a few seconds can be the difference between life and death.

If you're travelling 100 km/h (about 60 miles/h) on the highway, and you close your eyes for just four seconds, you're vehicle will travel more than 110 metres under no control.

The team has conducted multiple driver fatigue-related projects, and is working on the final stages to validate the algorithms before their hybrid detector system is marketed for production.

Lal says she hopes hybrid systems like this will become compulsory in all vehicles.

She also says they could prove useful for aircraft and train operators.

There's not much you can do to avoid fatigue when you're driving, say experts.

The best defence is to plan your trips carefully, and to take frequent rest stops – at least once every two hours if you're going long distances.