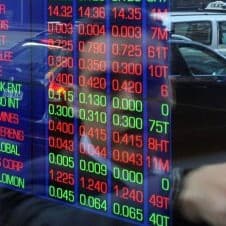 As rising iron ore and gold prices boot mining stock, the Australian shares have closed at a high. Insurers however, were amongst the losers after the powerful storms this past week.

Gold has hit a two-week high after a rate increase by the US Federal Reserve dimmed.

The big insurers were hit hard because of the storms that battered the coastal areas of Sydney.

The dollar was lower against the greenback, at 4:40pm AEST it was buying 73.3 US cents.

Against other major currencies, it was fetching 64.6 euro cents, 78.4 Japanese yen and 51 British pence.

In commodity trade, oil prices were slightly higher with Brent crude up more than 0.7 per cent to $US50.02 a barrel.