As iconic Australian brand Arnott’s has grown over the years and product lines have become increasingly complex, it became clear there was a need to upgrade to a next generation of smart palletising.

The 25-year-old Motoman palletiser that Arnott’s had installed in its NSW factory in Huntingwood in 1996 had well outperformed its lifespan, having produced several million pallets. Arnott’s required an integrated palletising solution that would work within existing space constraints and provide the flexibility to handle a large range of shelf ready cartons at high speeds.

It needed to be easily programmable, to support rapid product configuration and changeover. Pallets would need to be checked, wrapped and SSCC labelled, and all of this was to be achieved with minimal manning.

Robotic Automation had earlier provided Arnott’s with a version of a trial palletiser, incorporating patented MOTOPAL 780 robotic gripper technology. This trial system had been running successfully on a range of shelf ready cartons for about two years and had proven capable of handling every possible configuration, including some of the more difficult products.

So, the next step was to design a system that would fit the available space, which was located in a two-storey mezzanine at the end of the factory, with access only to a single lift to the ground floor delivery dock. As access to this mezzanine area is only via hoists for empty and full pallets, installation would need to use roof access via cranage. The adaptable modular system design, featuring eight Motoman robots, achieves maximum floor space utility.

The use of windows-based smart MAX AGVs provides increased flexibility, while achieving required productivity rates. Employing proprietary Motoman MotoLogix software, robots can be completely programmed and controlled via the host AB-PLC. This means all unique product programs can be simply changed in an instant, on the fly.

The result is a modular palletiser system that is intelligent, versatile, flexible, and intuitive. Robotic Automation calls it MOTOPAL.

Shane West, Arnott’s Group Regional Project Manager, was the primary client point of contact throughout the project. He said that after 25 years, the existing palletising system (at Huntingwood) faced future obsolescence and was the catalyst to go to market for a new solution.

“We went out to a few suppliers but found others provided a more conventional solution, with product conveyors and the like, similar to what we already had and not lending itself as well to the available floorspace,” said Shane.

“Robotic Automation’s solution was more innovative; it was a cleaner and more modern solution that presented an efficient use of space,” he said. “It offered ease of operation, requiring less operator movement across floors and stairs – and had fewer ‘moving parts’ meaning less likelihood of reliability issues.” 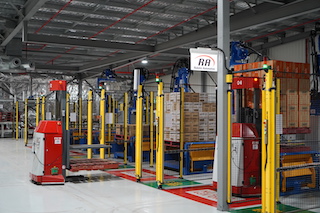 Project commencement was pending construction of the new factory space, with mezzanine level. “The first stage of the project commenced in December 2019, and obviously Covid then became a factor to work around in accessing site,” said Shane.

“Robotic Automation worked around this and were creative in programming the AGV tracks (for example) via livestream offsite,” he said. “We ran the existing systems in parallel until we were confident that the new system was fully operational, then we cut over.”

As can sometimes be the way, “the things that we thought might cause issues and planned for, were not a problem at all. There were a couple of things, though, that we weren’t expecting that caused us some headaches,” said Shane.

“We found that Robotic Automation were very helpful throughout the project, supporting us through these issues, and with training and ongoing support.”

Shane says that the solution has helped the business achieve its objectives. “We now have a reliable system that is right-sized, modifiable and expandable for future growth; we can add robot cells or retrofit, and the grippers are designed to handle a range of future packaging options.”

“We are definitely happy with the end result and would consider Robotic Automation for any further work.”