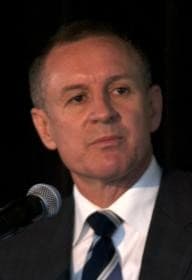 There has been angry reaction to Holden’s decision to axe 500 jobs in South Australia and Victoria, with calls for governments to cease subsidising the car manufacturer.

Earlier this week Holden announced it would cut 400 jobs from its production plant in Adelaide and 100 vehicle development jobs in Victoria.

And over the past 12 years the carmaker has been given $2 billion in subsidies by successive governments.

Simon Cowan from the Centre of Independent Studies says thinning 500 more workers from Holden just means taxpayers are paying thousands of dollars more per head for those workers left.

Mr Cowan says that kind of funding assistance is unsustainable.

"We're talking about a volatile market. We're looking at a trend where all the indicators are saying that the market in Australia is declining despite the level of subsidy," he said.

"If I was a worker in that industry I'd be very concerned, because from my perspective it looks like the entire industry is falling over."

Last year's funding deal between Holden and the Victorian, South Australian and federal governments came amid fears the company would close its Australian manufacturing bases.

In return for the assistance, Holden committed to investing $1 billion to make two new car models at its Adelaide plant, with a guarantee the carmaker would maintain its Australian operations for at least the next decade.

Mr Weatherill says his Government could now choose not to provide Holden with the funding.

"We need to reflect on what we've heard today. We want Holden to proceed with its $1 billion investment. This was to secure the period between 2016 and 2022. That remains very important," he said.

"This is an incredibly important employer in the north of South Australia so we now have to reflect on what this means for the whole agreement."

Mr Weatherill says the South Australian Government has been let down by Holden.

"I think we deserve better. There are a range of important undertakings in that agreement that I want to ensure are delivered to South Australians and now we need to have some serious discussions with the company," he told the ABC.

But Holden's chairman Mike Devereux denies they have broken the deal.

"We don't get any money [from the governments] until we start to bring that $1 billion to the table. And that doesn't begin to happen until the second half of this decade. That is still our plan," he said.

"We will work with the industry to ensure it is sustainable in a period where the Australian dollar is very strong, for example trading at parity or higher with the US dollar," he said.

Mr Gray has defended multi-million-dollar assistance packages given to the company.

"That's where we believe the economic opportunities and jobs will be," he said.

The Victorian Government says it has been assured Holden will continue to manufacture cars in Australia until at least 2022.

Holden hopes enough people will volunteer for redundancies or retire by the August 1 to avoid the need for forced job losses.