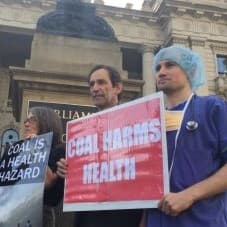 The Victorian Government is facing pressure from hundreds of health professionals to find a way to close brown coal plants in the Latrobe Valley.

The group Doctors for the Environment Australia, sent an open letter to Premier Daniel Andrews, saying that the plants were a danger to people's health and caused climate change.

Dr John Iser, who is the group's chairman, said he wanted the Government to set a deadline on shutting down plants in the region.

"We're asking for the Government to declare that they plan to close Hazelwood," he said.

"This has been in the offing for some time, but it's all plans on books, there's nothing definite, there's no concrete action plan."

However there has been no visable intentions by the Victorian Government to close the plants down.

Dr Iser said a switch to renewable energy would promote jobs in the region.

"Economists and people who've looked at job numbers tell us that there would be more jobs available in the renewable energy industry anyway," he said.

The group is protesting outside State Parliament today.