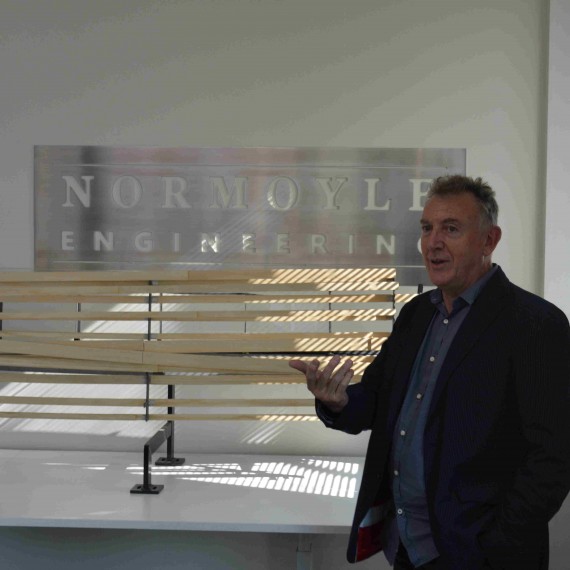 The adage that success breeds success could well have been written for Sydney-based fabricator and manufacturer F&D Normoyle Engineering.

The company has become recognised as one of Australia’s leading lights in producing structural steel, timber and glass and all types of architectural metalwork, particularly in the design, fabrication and installation of facades for some of the most striking buildings around the country.

The company’s portfolio includes numerous projects around Sydney’s Barangaroo development, as well as four ornamental ventilation stacks for the Melbourne East Link and the façade, steelwork and balustrade for the new Exchange building at Darling Square, Sydney.

And the company’s success can be directly attributed to the moment when company founder David Normoyle elected to follow the path to advanced manufacturing, embracing 3D modelling and computer aided design and hiring key personnel to bring this about – notably Alex Scotts, now the company’s Senior Project Manager.

This increased company capability took F&D Normoyle Engineering away from the mundane, where it found itself having to compete on price with lower cost imported steel fabricators, to ever more ambitious projects, where its new skills allowed it to compete on its abilities.

Normoyle and Scotts agree that the successful digital design, fabrication and delivery of the ventilation stacks for the Melbourne East Link comprised a pivotal moment for the company. “It got a foot in the door, and showed what we could do,” says Scotts.

And in a business where you are still only as good as your last job, from that one opening, F&D Normoyle has gone on to take on and successfully deliver ever more ambitious architectural projects.

It has also seen the company establish a reputation for working with many “exotic” materials, including duplex stainless steel and copper nickel alloys in its work on Sydney’s desalination plant.

“In the past, it was a problem convincing people that you could do it,” says Normoyle. “But now our reputation is established.”

“And in the construction business, when things get complicated they know there are only a few companies they can turn to.”

And at the same time, the traditional fabrication work continues, with a second factory leased nearby to produce 45km of wall lining subframe for the Sydney North Connex tunnel.

Things were not always so: David Normoyle recalls a meeting in 2005 with the company’s bank at the time that placed an unachievable repayment schedule of 3 months on a loan of $300,000 at a time when construction work was scarce. It very quickly became clear that the bank regarded this as a make or break situation.

It was at this point that David Normoyle resolved to change banks. And with the encouragement of his wife, Forooz – herself a former banking professional - he made contact with St.George Bank and established a business relationship that exists to this day.

That relationship has endured through some testing times. “It wasn’t so long ago that $5-6 million turnover was a really good year,” says Normoyle. “And now we’re looking at $15-20 million.”

“But St.George has supported us when we’ve needed support, and they’ve understood what we’ve needed to do. It’s that sort of relationship.”

Andrew Hall is Senior Relationship Manager at St.George in the team that specialises in manufacturing and wholesale, and has been working closely with F&D Normoyle.

“It’s really about spending some time and working out what they want to achieve and what we can realistically do for them,” he confirms. And in many cases this hasn’t involved traditional banking products.

To this end, through its strong industry contacts St.George has introduced F&D Normoyle to other synergistic companies, such as Southern Steel, which has led to collaborative project work. It has also entailed an introduction to the Advanced Manufacturing Growth Centre, which has helped facilitate the company’s advanced manufacturing evolution, while providing access to government grant funding.

F&D Normoyle has come a long way since David Normoyle founded the company back in 1986.

The original F&D Normoyle Engineering had been set up in 1890 by David’s great-grandfather “Old Dave” Normoyle as a coachbuilder and blacksmith in Young, New South Wales.

(That company – National Engineering Young, NSW – underwent several changes of ownership and name, before eventually being liquidated in the October of 2013.)

In 1986 Normoyle Engineering began working out of a small garage in Bondi Junction with a 4in grinder and a 240V stick welder as the only pieces of plant.

This is in stark contrast to the well equipped factory currently owned and operated by the company in St Peters, where 3D modelling and computer-aided design are married to advanced materials processing to produce award-winning custom features for some of the 21st century’s most striking developments.

However, as David Normoyle puts it: “At the end of the day, we’re still beating metal around.”