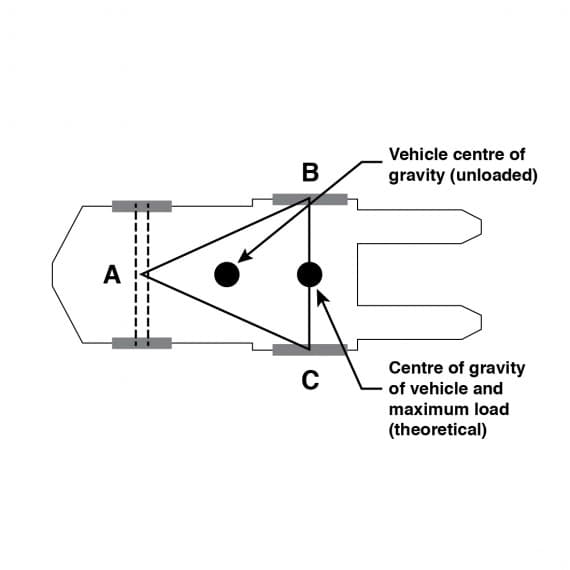 Understanding the concept of the stability triangle is fundamental to the safe operation of any lift truck, says Ross Grassick of Lencrow Materials Handling.

When viewed purely in two dimensions (as in Fig 1), the forklift stability triangle can be seen as the joining of three points: the two front wheels (B and C) and the pivot-point of the rear axle (A).

And, if any load is not properly positioned on the forks, the combined CoG will be moved towards the CoG of the load – potentially moving it forwards (or sideways) outside the stability triangle.

The stability triangle can be considered more as a pyramid, with the three points A, B and C from Fig 1 joined at the maximum lift height of the truck. Fig 2 The stability triangle is really a pyramid

The combined CoG of the truck and the load can now be considered as being suspended from the point of the pyramid. However, the point is not a fixed location – it moves relative to A, B and C, remaining above the combined centre of gravity (Fig 2). So, for example, at the maximum rated load of the truck, both the CoG and the point of the pyramid will be directly above the mid-point of A-B.

This three-dimensional model of the stability triangle serves to illustrate several more important factors contributing to the stability of the loaded truck.

This is why loads should generally be carried with the mast tilted backwards if possible.

Secondly, the height at which the load is carried is a further major contributor. Because the pyramid tapers towards the point, the higher the CoG the smaller the stability triangle becomes and the closer the CoG is to the edge of the triangle.

While this may not seem a problem with a static load, in a dynamic situation it means that the CoG has less distance to travel outside the triangle, and so an outside force such as cornering or sudden braking can cause it to become unstable.

This is why loads should always be carried as low as possible when moving a loaded truck.