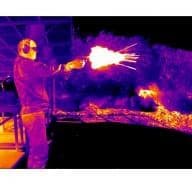 FLIR, a global leader in thermal imaging systems, has released a new range of thermal imaging cameras, equipped with a cooled detector.
The A35x0sc/A65x0sc-Series from FLIR are ideal tools for industrial R&D – especially for those applications that need better image quality, more sensitivity and a higher frame rate than from a thermal imaging camera with an uncooled detector.
When higher frame rates and better image quality are required scientists can choose among the FLIR X8000 or X6000 series.
The FLIR A35x0sc/A65x0sc-Series cameras all feature Mid-Wave Infrared Cooled detectors.
This means they can see through or at materials that no other uncooled Long-Wave camera can, including certain types of glasses or plastics.
The FLIR A65x0sc produces crisp thermal images of 640x512 pixels. Users that do not need this high image quality for their application can choose the FLIR A3520sc which produces thermal images of 320x256 pixels.
All versions have a high thermal sensitivity of <25 mK which captures the finest image details and temperature difference information. This is only achievable with cryogenically cooled infrared detectors.
External triggering allows synchronization of the image capture to the most fleeting events. It is also possible to configure one camera to be master and others to be slave for applications requiring more than one camera.
All FLIR A35x0sc/A65x0sc-series cameras work on a snapshot mode: all pixels are registering the thermal event simultaneously. In case of moving objects or on motion applications, such cameras can avoid image blur that would occur if a non-snapshot camera would be used.
The FLIR A35x0sc/A65x0sc cameras work seamlessly together with FLIR ResearchIR/ResearchIR Max. It allows for viewing, recording and advanced processing of the infrared data provided by the camera.
Each camera comes standard with a basic version of FLIR ResearchIR.
FLIR SYSTEMS Australia Pty Ltd
Ph: 1300 729 987
www.flir.com