Major logistics, intermodal distribution and warehouse facilities are large and valuable facilities, operating 24/7 and filled with millions of dollars’ worth of merchandise. And their importance to the industrial, commercial and retail sectors – and the value of the goods they handle – has increased by leaps and bounds as buyers move to online buying of the merchandise they want.

Risk management is an important issue, with security issues growing in scale and type as the facilities involved expand to accommodate trends in online trading, and as entirely new facilities emerge, such as the purpose-built “aerotropolis” of which Sydney’s new Western Sydney International (Nancy-Bird Walton) Airport, is a major example.

The national freight agenda is now clearly focused on integration and concentration to provide seamless, efficient transfer movements across all modes of transport, both at capital city and regional centre level.

Expanding risks implicit in this rapid growth of high volume distribution facilities include theft, product contamination, unauthorised personnel gaining access to sensitive data or logistical information, outright sabotage by disgruntled individuals – and even violence against employees and visitors, which is an employer’s and facility manager’s Duty of Care issue to protect against.

Workplace violence can often stem from the employee population. It could be domestic violence issues, such as an ex-partner coming into the facility, or former employees who are angry after being terminated. Beyond the violence itself, such an incident disrupts business continuity.

To effectively mitigate these risks, distribution centres can formulate a physical security plan to: prevent unauthorised individuals from entering the premises; reduce theft of merchandise or access to sensitive commercial data; keep weapons off the premises; and create a safe environment and a culture of safety and security among the employee population.

A layered approach to physical security

Meeting these objectives calls for a layered programme of security entrances with manpower and technology.

The fenceline perimeter should discourage casual infiltration from non-employees. Since higher security practices exist inside the building, the goal at the fenceline is to primarily deter and potentially respond if an incident occurs. 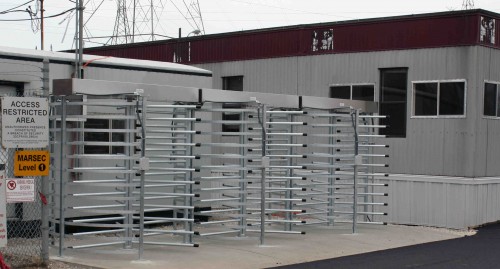 Full height turnstiles achieve their primary security objectives through their robust barrier construction and ability to efficiently control the flow of visitors and staff to the facility, who are recorded also via security cameras during entry.

A survey of security integrators and consultants in the USA found that 71 per cent thought that it was “somewhat likely” or “very likely” that a security breach could happen at their facility as a result of a tailgating incident (additional people following someone through the door or gate). One in three said a tailgating incident would cost their organisations sums from US $2 million to sums “too high to measure”. Most surveyed believe barriers and education are the most effective tailgating mitigation strategies.

Advanced security entrances can offer a unique level of protection within the building, as they not only fully prevent tailgating, but also verify the identity of every individual entering a facility. They cannot be compromised in the way that a security guard can through social engineering, and they cannot be fooled or tricked.

When integrated with access control systems, they reliably deter and detect unauthorised entry attempts. Certain types can even prevent unauthorised entry without supervision. And, they also enable accurate monitoring of who is in the building at all times.

Based on its experience in 27 countries, Boon Edam advocates a layered cost-effective system of security entrances to sensitive business facilities, increasing in sophistication and features as employees and visitors advance from the perimeter of the facility involved, to the core areas where sensitive data, distribution and commercial information is managed.

Importantly, in terms of presentation to staff and visitors, this security cannot be ugly or threatening; it has to be architecturally crisp and harmonious, reflecting the style and presentation standards of the leading organisations involved as well as providing an attractive workplace.

One of the most important reasons that security entrances are being deployed today is to accurately control and monitor who is on the premises, along with when they entered and exited. And security entrances can also cost-efficiently govern the unwanted passage of people through tailgating or piggybacking.

While distribution centres present several significant vulnerabilities, security entrances, along with guards and technology, can work in an effective layered approach. You can leave far less to chance for error compared to using guards alone or swinging doors with access control systems. You can effectively deter and control access to the secure facility, track who is in the building 24/7, and minimise theft. In the end, security entrances enable an overall physical security plan that ensures maximised safety and optimal risk mitigation.