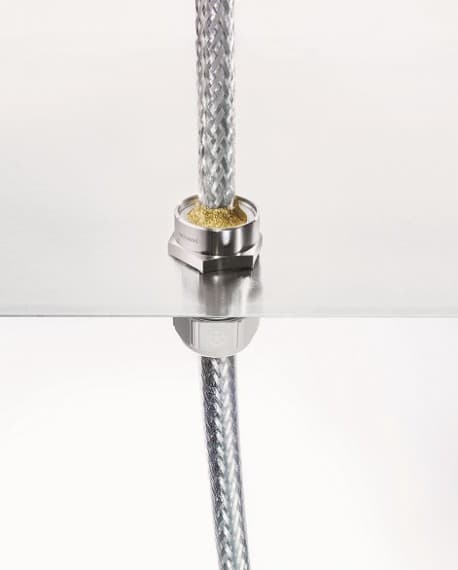 Electromagnetic interference can be harmful to data transmission and can inhibit Industry 4.0 and factory automation processes.

To create Electromagnetic Compatibility (EMC) compliant data transmission cables, the data and control signals should be locked in a Faraday cage, says global cable authority, LAPP. By forming a continuous covering or mesh of a conductive material, a Faraday cage blocks electromagnetic fields from reaching inside its shielded area.

LAPP Australia, which has direct access to more than 20,000 products from the global LAPP range, is introducing its latest SKINTOP® BRUSH series of cable glands, designed to be installed safely, quickly and easily and to offer optimum EMC protection.

“The SKINTOP® MS-M BRUSH, for example, has a 360-degree brass brush, which provides low-resistance contact between the shielding braid and the gland, without causing any damage to the shielding braid,” explains LAPP General Manager, Simon Pullinger.

“From the point of view of EMC, the design of cable glands, cables and connectors must be such that the connection between the cable shield and the earth potential has a low resistance. Ideally, the cable shield, together with the cable gland and the metallic enclosure wall, establishes a closed connection,” he says.

• The cable is centred, fixed, strain-relieved, and hermetically sealed in one step. The interference-free SKINTOP® BRUSH series This series has been specifically designed to provide the perfect Faraday cage environment and protect cables against any outside electromagnetic interference.

SKINTOP® MS-M BRUSH, which provides reliable EMC protection even after dismantling and re-installation, as the shielding braid is not damaged by the brass brush.

SKINTOP® BRUSH ADD-ON, an innovative EMC extension that is the world’s first patented, active EMC locknut. It cuts into the enclosure and at the same time offers an optimal, low-impedance 360° shield contact.