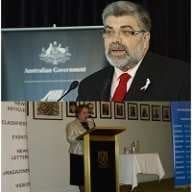 Manufacturing has become a major issue in the lead-up to the federal election.

Both major parties have pledged support for the struggling manufacturing sector. And both sides have firm strategies in place to ensure this sector survives and prospers.

The Government’s $1 billion Plan for Australian Jobs announced earlier this year has become a key plank in its election strategy.

And the Coalition’s recent announcement to slash red tape by $1 billion a year, including the abolition of the carbon tax, is also designed to woo manufacturers.

Industry and Innovation Minister Senator Kim Carr has promised “a greater focus on teaching, engineering, science and research” if re-elected.

He will focus on programs to bring together centres of innovation at universities and research labs with factories.

Senator Carr, a passionate supporter of the car industry, says he will work closely with vehicle manufacturers to ensure Australia has a viable auto industry in the future.

“We believe an essential part of a diversified economy is to have a strong manufacturing sector,” she says.

An Abbott Government would create a significantly improved economic environment for industry by slashing unnecessary costs and restoring business confidence.

“We want to create genuine incentives and opportunities for industry to grow.”

At a recent PlastixANZ dinner in Melbourne, Ms Mirabella said the Coalition’s main priorities would be to abolish the taxes now crippling industry and to cut red tape preventing major growth.

So what are the key differences between the major parties?

Labor and the Coalition agree the automotive sector needs Government support, but they have a different idea of how much support and how funding should be administered.

A Coalition government would review these funding arrangements.

“The (car) industry is in crisis, Ms Mirabella says. “The Government’s current policies have failed and failed miserably.”

Allocating large sums of money to prop up the industry is not always the answer.

“There must a proper, detailed analysis to determine the current state of the industry, she says. “Having ad hoc policies and handouts is not a solution. The industry needs certainty and we will create a framework to provide it.”

There is bipartisan support for strong anti-dumping measures to protect domestic industries from foreign companies exporting products to Australia at a price below the cost of manufacturing them.

The Coalition supported the Government’s recent legislation to establish an Anti-Dumping Commissioner.

But Ms Mirabella foreshadowed a further strengthening of anti-dumping laws under a Coalition government.

The Coalition would cut the time and cost of anti-dumping applications and enforce Australian standards on imported goods.

But while both sides have strategically released key elements of their manufacturing policies, there are still many issues that remain unresolved.

For instance, the ALP has not indicated whether there will be a further tightening of tax concessions for research and development (R&D) by large companies. There is industry concern the R&D tax concessions will be targeted for savings by the Government looking to return the budget to surplus.

The Coalition has made it clear that if elected it will reverse cuts to R&D Tax Incentives for business with a turnover of over $20bn a year to create broader access.

The Coalition has also announced plans to slash company tax rates by 1.5 per cent for 750,000 companies within two years to help stimulate the economy.

In 2010, Labor promised a two percent cut in the corporate tax rate to 28 per cent. This was to be funded by the mining tax, but the returns to Government were well below initial estimates. The promise was subsequently abandoned by then treasurer Wayne Swan last year.

Both sides are pledging greater consultation with key industry groups.

Senator Carr says his first priority as Minister is to learn what he can from industry – the conditions, the challenges and the opportunities.

“I want to understand the problems, yes. But our business in this government is solutions, he says. “We have a window of opportunity here to build them.”

A Coalition Government would consult regularly with industry representatives before formulating policy.

“You would be crazy not to listen to the people who are at the industry coalface,” she said.

Senator Carr says the Government would work closely with business and workers to lift the annual productivity growth rate to 2 percent or better.

“Yes, the conditions are hard. But they have been hard before, Senator Carr said. “We ought be all the more determined to confront them.”

Despite the gloom and doom, both sides remain optimistic about the future of manufacturing in Australia.

“The challenges are not insurmountable. But we have to act very quickly,” says Ms Mirabella.

“The outcome of the forthcoming federal election will be vital in determining whether manufacturing will grow and flourish in Australia.”

MANUFACTURING: WHERE THE PARTIES STAND

These are the key differences between the major parties on the big issues currently affecting the manufacturing sector: