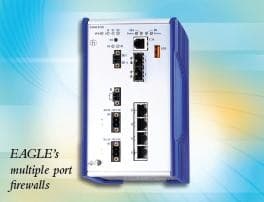 Hirschmann has released one of the most important advances in Ethernet security hardware – two new multiple-port firewalls.

Through Belden, it has introduced the EAGLE20-0400 and EAGLE30-0402 firewalls, which deliver significant cost savings whilst achieving greater link speeds. They represent a significant technological innovation as they are the first firewalls on the market in a convectioncooled DIN rail housing that supports six LAN ports — two of which are Gigabit — with such a range of WAN connectivity.

This extended number of ports enables users to deploy a single device instead of having to use multiple EAGLE20s.

Robust network security, which is a critical step towards highest network availability, is provided.

Because Belden has focused on the needs of industrial networks, the new EAGLE20-0400 and EAGLE30-040 bring a number of key benefits over current options by offering multiple ports, Gigabit ports and WAN connections.

Initially, the hardware release will support Ethernet ports only.