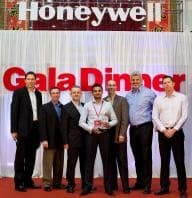 Dematic, a leading supplier of logistics automation, logistics IT, materials handling and storage systems, was a winner at the recent Honeywell Partner of the Year Awards held during Honeywell’s 2012 Asia Pacific Partner Conference.
Dematic received the award for delivering the largest LXE project within the region and for its continued market development and product introductions including the recently released LXE Thor vehicle mount terminals.
In accepting the award, Dematic’s General Manager of Real Time Logistics, Nathan Taylor, said that receiving the Honeywell Partner of the Year Award was an honour as it recognised not only the size of the project but also its successful design and implementation.
“Crucial to winning such a large project was Dematic’s track record, size and scale and our comprehensive service and support offering,” said Mr. Taylor.
Dematic’s Real Time Logistics group is Australasia’s leading integrator of mobile computing and IT solutions for supply chain applications.
Dematic Pty Limited
Ph: 02 9486 5555
www.dematic.com.au