Ford Motor Company, founded in 1903, is no slouch when it comes to producing motor vehicles – some 5.5 million per year, in fact. So it came as no surprise when it turned to Universal Robots to help it streamline its operations at its major production site in Craiova, Romania.

Constant productivity, improved quality and zero room for error is the name-of-the-game for Ford so it valued Universal Robots and its collaborative robots (cobots), which would help deliver a faster production throughput while relieving employees from repetitive tasks.

Explains James McKew, Regional Director for Universal Robots Asia Pacific: “Ford was in search of solutions to enhance their manual workforce, generating added value to the manufacturing process. In doing so the company realised the need for new automation solutions that could offer space savings, collaborate with people, be moved around when needed, whilst also providing a high degree of safety and a fast return of investment.

“After much research, Ford selected four UR10’s from Universal Robots as it ticked all the boxes,” says McKew.

Three of the cobots are fully integrated into work processes and are working safely alongside employees on the assembly line. “One of the UR10s performs the greasing of the camshaft followers, another fills the engine with oil, and the third checks the engine with a UV light and a camera for leakage after it has been filled with oil.” 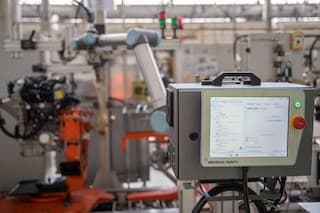 The camera used in the engine check process is a Cognex camera vision - a UR+ product – designed to communicate with the cobot through Ethernet.

“The UR10 cobot operates it with the help of an end effector (gripper) specially created and personalized by the Ford engineers according to the application,” McKew explains.

The fourth UR10 unit is used for tests and training. “Due to the integration of the UR10 into the system that controls the assembly line, the process is simplified.”

Speaking to the uptake of the UR10 locally, McKew adds that it’s not surprising that the UR10 remains the most widely deployed cobot in Australia and New Zealand. “Offering a large payload of 10kg and a long reach capability of 1300 mm, the UR10 is a worthy investment thanks to its versatility, long service life and its ability to adapt to various application extensions in future.”

Adrian Calangiu, Area Manager at the Ford plant comments that their team from the UK did a global analysis on which type of cobot best suited their needs in the engine and vehicle plants. “When we implemented the cobots, it was not our intention to replace people, we wanted to help the operators that perform repetitive and challenging jobs, having the cobot act as a colleague to the operator instead of as a replacement. The UR cobots have the flexibility to work near the operator, without jeopardizing his safe zone. The collaborative robots also relieve him of monotonous, repetitive tasks giving him the opportunity to contribute in a creative manner.”

The UR cobots were easy to implement and operators got to grips with them very quickly – with the help of the Universal Robots (UR) Academy online modules.

On the local front, McKew concludes saying that he believes that cobots offer countless opportunities to simplify and automate processes. “Our team is on-hand to help take the load off local automotive manufacturers in their quest to accelerate reshoring.”