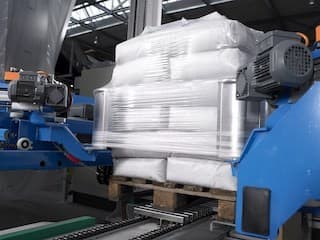 Above: The stretch hood safely protects the palletised stacks against environmental stress. Below: The easy, intuitive and reliable operation of the new BEUMER stretch hood A is especially appealing to customers.

Humid beverage cartons that must not be subjected to mould under the packaging film, stacked roof tiles that should not break on the loading area of a truck in case of heavy braking, and expensive articles that must not be removed from the packaging unnoticed - how can all three of these shipments be packaged safely and economically at the same time? Jörg Spiekermann of BEUMER Group has the answers.

"For our customers, it is often not just a matter of packaging goods simply to protect them from environmental influences", says Mr Spiekermann, sales manager for palletising and packaging systems in the Consumer Goods area of BEUMER Group. In his business sector, the requirements are often very different – and above all demanding. It must be possible to transport the packed stacks safely on the loading space of a truck, preventing them from slipping and being damaged.

This is especially concerning for transported goods such as glass, stone or roof tiles. Companies often use the stretch wrapping process and this is because of the significantly lower initial investment for the machines compared to stretch hood systems. However the stretch wrapping process presents some disadvantages. "Stretch wrapped film's elasticity allows to solidify the palletised goods during packaging, but only provides little vertical tension force to the load," explains Mr Spiekermann. "But it is exactly this vertical tension force that is responsible to provide stability for the transportation loads. This technique is not suited for materials with sharp edges, such as bricks."

With stretch hooding BEUMER Group offers an efficient possibility, even for difficult cases. The high-capacity packaging system: BEUMER stretch hood A, covers the palletised load units with a highly elastic stretch hood. In the consumer goods sector, these can be bricks or glass items but also boxes of detergents, buckets of paint or packages stacked in a chaotic way. During trans-shipment and outside storage, merchandise is protected reliably against environmental influences such as sunlight, dirt and humidity. Owners can transport the products in a perfect state to the customers. The stretch film fits every stack. Similar to stretch wrapping, the film is very elastic and reinforces the material both by the horizontal and vertical restoring forces. Thus, this process offers a considerably higher load stability. "We can prove that," promises Mr Spiekermann.

In order to prevent the goods from detaching from the palletised unit in case of determined loads, the system provider together with DEKRA, the world's leading expert organisation for safety, quality and environmental protection, have performed different driving tests under extreme conditions.

Mr Spiekermann remembers a customer who had to stack filled jam glasses directly from production on pallets and pack them securely. The challenge: the glasses were not in cardboard boxes, which would be easy to pack, but in trays. Reusable sheets were placed between the glasses for protection. Thus the easily fragile goods were stacked up to two metres high.

The customer first thought about the stretch wrapping process. "However, the film force acts on the whole stack. The glasses would be pressed together and could get damaged," says Mr Spiekermann. "Our stretch hooding makes sure that film and stack form one unit". But what happens if the stack is tilted up to 27 degrees during the loading process? This was the first requirement of the manufacturer. "We are able to fulfil this request," says the BEUMER expert. "This was done by packing the stack with two thick film hoods, which also meant both more time and materials". Since it is not only a matter of load securing, but also of economic efficiency, the BEUMER team together with the customer performed various tests and developed a solution in which the stack can tilt safely up to 14 degrees; this was absolutely sufficient for the user.

"We perform these packaging tests in our own test centre until we achieve the required result," says Mr Spiekermann. The film plays a major role. The experts in Beckum have about 100 different types of test films with different characteristics - thick, thin, soft, tough or even completely different. "If we are not able to meet the requirements, we contact the film manufacturers," says the BEUMER expert.

“The decisive factor is: What kind of product are we handling with, which are the dimensions and the requirements to the packaging? The film manufacturer finds the ideal formulation for the required characteristics and suggests the optimum film format. The customers are often present during these trials, which clearly strengthens their trust in us,” said Mr Spiekermann.

The special thing about the unusual

From hoses and cable reels to randomly stacked packages – time and again, companies approach the system provider with tricky packaging issues. And in most cases, the customers had previously used the stretch wrapping process, but could not solve the task in a satisfying way. This was the case, for example, with a Dutch company which sells Christmas items, and also with a Swedish furniture manufacturer. In both cases packages of different dimensions are stacked on pallets. "This looks terrible and is very unstable at first," says Mr Spiekermann. "But this is exactly how the stacks have to reach the customers.

“As every package has a different weight, the weight of the loaded pallets can vary between 100kg and two tonnes. The BEUMER stretch hood A is equipped with a measuring system in order to measure such complex stacks by means of laser and ultrasound. The machine recognises the highest points and adapts the film length accordingly.

Depending on the application, BEUMER Group also relies on dual-format machines in order to work with different film sizes or film variants. The machine itself recognises the respective pallet size and choses the suitable film.

No wetness in, but out

Mr Spiekermann uses the following examples to illustrate how various the requirements to a film can be: If roof tiles are stored outside and are not protected against humidity, moss can grow on the surface relatively quickly. Therefore they have to be packed. However, the corners and edges of the roof tiles are often razor-sharp.

"Before starting the packaging process, the film is first overstretched. If it then shrinks around the stack, holes can develop at these sharp points," says the sales manager. "So, together with a manufacturer, we have developed a puncture-resistant film."

But sometimes the films shall have holes which enable the escape of humidity from the packed stacks - as in the case with a sparkling wine producer. "The bottles come from the filling system. Some of them are moist and are packed in cardboard boxes. If there is an air-tight stretch hood over the stack, the humidity remains in the packaging. Mould can develop so quickly," says the BEUMER expert.

Moisture also occurs when the filled bottles stacked on the pallet are exposed to extreme heat, caused for example by sunlight during transport. "Together with the manufacturer we have developed a film with very small holes distributed on the whole film," says Mr Spiekermann.

It happened with some customers that goods kept disappearing on their way from picking to the warehouse until they arrived at the customers' premises without being noticed. With the stretch wrapping process, someone can easily reach into the opening of the packaging from above and take a drilling machine or a toolbox, for example, without destroying the film.

This was the case with a manufacturer of power tools. Also at a drugstore chain, not quite inexpensive products repeatedly disappeared in this way. The losses could amount to up to four per cent of the turnover. "The moment the companies started using our stretch hooding process, this problem was solved," reports Mr Spiekermann. "Because without destroying the film, no one can take anything out of the packaging."

First of all: economic efficiency

As important as the protection of the goods is during packaging, the solution must always be profitable for the owner in the end. It's like the jam manufacturer. "We can calculate exactly how much film our customer can save with the stretch hooding process compared to the stretch wrapping process," explains Mr Spiekermann. In addition: how often does the film roll have to be changed in a shift? Because that also means time.

How economical a changeover can be is shown by the example of a logistics company that handles distribution for various customers. In order to pack the large number of palletised stacks, 12 stretch wrapping machines were in use. "The stacks had to be driven on the machine, the film was fastened to the pallet, the packaging process was initiated, the film was cut off and the stack was finally driven to the forwarding department.

"That was about 1,000 pallets a day. About three minutes were necessary to have each pallet packed," Mr Spiekermann explains. BEUMER Group replaced the twelve machines by one stretch hood system – and the logistics provider could save up to 3,000 working minutes per day.

"Of course we cannot package everything with a stretch hood," says the sales manager and remembers a customer, who wanted to cover bath tubes with a film. These products were simply too large for our procedure." It was possible, but finally too complex and therefore too expensive.

"But, we are able to find a suitable solution for most special applications. For our customers we are definitely the problem solvers, who also answer very specific packaging questions very confidently."