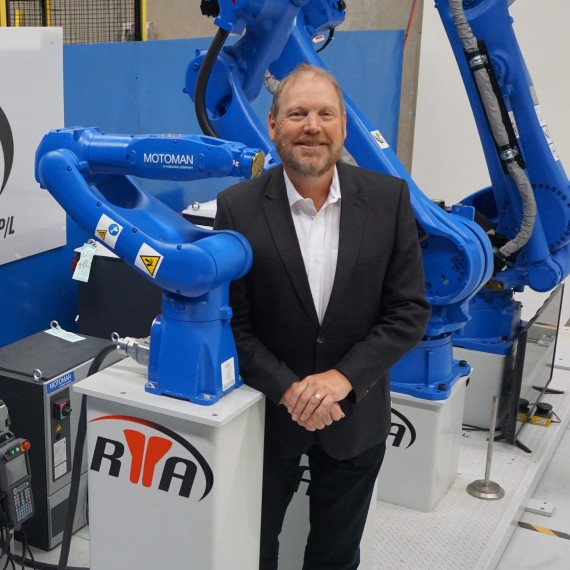 Robotic Automation turned 30 during 2018, and to mark then event, Laurence Marchini caught up with MD and founder Colin Wells to pick his brains on the state of Australian industry.

Perhaps it’s one of those inevitable truths. But one of Australia’s most successful automation entrepreneurs continues to find himself getting frustrated with potential customers. And it’s for all the wrong reasons.

Colin Wells could be forgiven for thinking that he’s seen it all before. But you quickly appreciate that the day he does think that is the day he will retire.

Wells founded Robotic Automation (RA) in 1988 after 10 years with GEC Robotics, in the UK and Australia and in the four decades in the robotics business he has certainly seen a lot… but not everything.

However, there are several recurring themes, and of these, the most frustrating, he says, are when companies fail or are unable to look at the big picture.

“They’ll ask us in to look at automating a particular – possibly labour-intensive – part of their production flow, without considering the implications for the rest of the plant or the supply chain,” he says.

“And all the time, there’s some other part of the process that’s sticking out like a sore thumb as being an obvious bottleneck – and it could well be much simpler and certainly a better, faster bang for bucks to solve than the original problem.”

That first consultation is all-important. And it explains where RA positions itself.

“We’ve developed into an unusual position,” says Wells. “We’re considered as both consultants and trusted suppliers” as evidenced by the considerable amount of repeat business RA has enjoyed over the years.

So, while RA does offer a range of standard products from some of the big names in robotics and other machinery – it even owns the Motoman name in Australia – it is in the application of the equipment that it has made its name. And it continues to do so, with projects completed for Australian manufacturers of all sizes – right up to many household names.

It is an accurate measure of the scale of the projects in which RA is involved today when Colin Wells talks about the typical quote process.

“It’s far from a straight bill of materials,” he says, explaining that the process can take months to finalise, typically costing as much as $20,000. So it’s important to maintain a high win rate.

Some of the recent projects have been particularly impressive. For example, RA has designed and supplied the extensive system of 25 AGVs that perform the majority of the logistics in the new $2.4 billion Royal Adelaide Hospital. And for all the criticism that building has received, the AGVs are earning their keep 24h x 365d delivering several hundred tons per day of meals, stores, linen, pharmacy, waste, operating theatre case carts etc to the 800-bed nine-storey hospital. RA also controls all the lifts to ensure efficiency is maintained.

“You’re looking at three times the staff costs to run a hospital if you don’t factor in this level of automation,” says Wells. “And it’s far better to be designed in from day one… it’s no good being called in after the event and finding that the lifts are too small to accommodate an AGV or the corridors are too tight for them to pass other traffic or manoeuvre.”

When it comes to general industrial automation in Australian industry, though, Wells is far more positive, and points to the high level of innovation in the market: “The technology is sometimes at a higher level than even Germany is in some areas,” he says. And he goes on to mention that the technology now known as Industry 4.0 “has been going on for many years just now has a new badge”.

One area where Robotic Automation has consistently expended more effort than most is in supporting its customers long after the initial contract has been fulfilled. Indeed, of the more than 3500 projects that RA has completed during its first 30 years, the company continues to support the vast majority of still active systems.

“There are many cases where we find ourselves fixing other people’s robots,” says Wells. “It’s unfortunate, but it seems that many of the big names in our industry don’t want to take responsibility, and that’s no way to keep a client happy, so we assist when we are asked and where we can.”

“You have to appreciate that for many companies an investment in automation can still seem like a leap into the dark. They simply don’t have the expertise. That’s where proper after-sales support comes in – even to the extent of embedding support staff into some large multi Robot customer’s plant, it makes good sense for them technically as well as commercially.”

Looking back on 30 years of Robotic Automation, Colin Wells concedes that the journey hasn’t always been a smooth one. The company grew to more than $25 million turnover in its first 20 years – and then suffered while Australian industry struggled with the effects of the GFC and post GFC shake out.

“There was a long period where nobody was buying anything,” he says. “We had to make a lot of tough decisions to survive – many of our competitors did not survive. Change and adaptability became a big part of our business philosophy.”

That adaptability has seen the company diversify a long time ago into areas such as warehouse automation and AGVs as well as supplying complete system solutions in industries involving materials handling, packaging, case packing and automated warehouse solutions - ie turnkey projects.

One of biggest problems Wells says in growing the business is finding suitable staff for its particular blend of robotic high-tech integrator work. “Currently we are just under 50 and would like to keep it that way but have been struggling to fill several positions anyway so it’s a bit of a moot point,” he says.

“The last year has far exceeded expectations,” says Wells. “We are a $20 plus million growing company, as long as we remain open to change, innovation and continuous improvement.”

“After all that’s what we are offering our clients in a roundabout way,” he concludes.