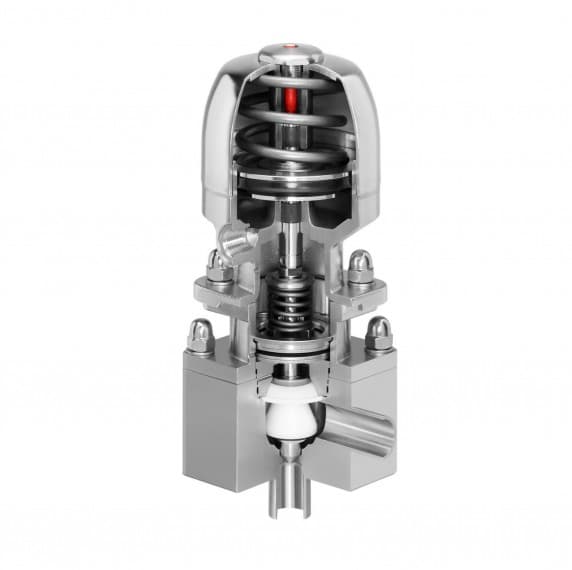 However, small volumes can only be controlled with an inadequate level of accuracy, or not at all.

GEMÜ has now developed the GEMÜ 567 BioStarâ control valve in order to solve this problem.

The GEMÜ 567 BioStarâ control is a 2/2-way globe valve with a regulating needle or regulating cone for high control accuracy and precise dosing.

The valve seat on both versions is sealed using a soft-seated seal.

The actuator is separated from the media-wetted area by an FDA-compliant PTFE diaphragm.

This ensures a permanent, temperature-resistant seal and thus meets the high requirements of the pharmaceutical and food industries.

Compared with bellows valves, cleaning the valve is significantly improved by the hygienic and minimal deadleg design.

It is likewise possible to clean and sterilize the valve using a CIP or SIP procedure.

The valve is also available with an integrated bypass so that the flow velocities required for the rest of the system can be achieved during the cleaning process.

GEMÜ 567 BioStarâ control can be integrated into a multi-port valve block, if required.

This is another special feature of the valve, which not only requires considerably less space in the system, but also significantly reduces the installation and welding effort.

All surfaces which come into contact with the product are precision-turned or polished.

Further, additional electropolishing can achieve a high surface quality of Ra 0.25 µm. EHEDG certification and testing in accordance with Procedure 3A are currently in preparation.

The GEMÜ 567 BioStarâ control valve is available as an angled design in nominal sizes DN 8, DN 10 and DN 15.