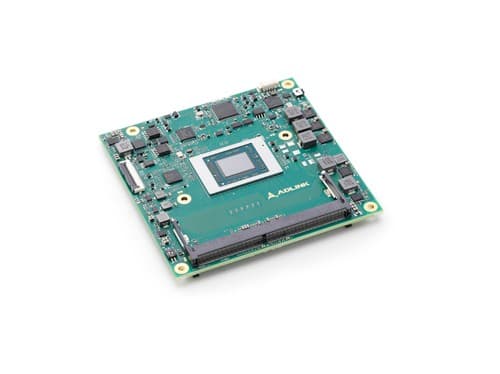 With double the core count, the cExpress-AR is well suited for use in demanding graphics-based applications such as, ultrasound image processing, 4K high speed video encoding and streaming, embedded gaming and infotainment and AI inferencing at the edge.

The AMD Ryze  V2000 APU has a high-performing graphics computing core making it great for use in AI inferencing applications without the need for an additional GPU.

ADLINK’s cExpress-AR is also well suited for mission critical applications in harsh environments, featuring standard support for up to 64GB DDR4 in two SO-DIMMs, ECC error correction based on selected SKUs and configurable TDP (down to 10W), Passive cooling and 6 to 8 core offerings.

These features are fully compatible with the COM Express Rev. 3.0 specification, allowing for existing systems to be upgraded and gain in performance without changing the carrier design.

The cExpress-AR is the first Type 6 module on the market to support an octa-core (8-core) embedded SoC, with up to 16 threads and an impressive turbo boost up to 4.2 GHz

The cExpress-AR is well suited for use in demanding graphics-based applications including AI inferencing at the edge, ultrasound image processing, video encoding/streaming, embedded gaming and infotainment

ADLINK Technology mission is to affect positive change in society and industry by connecting people, places and things with AI.