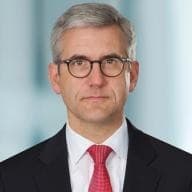 The Board of ABB, a global leader in power and automation, has appointed Ulrich Spiesshofer as its new chief executive officer.

Hogan will continue with ABB for some months as Senior Advisor to the Board.

Spiesshofer joined ABB’s Executive Committee in 2005 and was named responsible for DM in 2009. He has led a doubling of the division’s revenues by organic and inorganic means, and the integration of Baldor – ABB’s largest ever acquisition.

He has increased profit margins through a turnaround in Robotics, as well as the profitable growth and relentless execution of the motors and drives activities.

“ABB has developed a strong bench of talent: I am extremely pleased that the new CEO comes from within the company, and brings a solid track record and deep knowledge of the portfolio,” said ABB Chairman Hubertus von Grünberg. “Ulrich has been a key force in shaping and implementing ABB’s strategy, and the integration of Baldor stands out as a benchmark for successful large acquisitions.”

Spiesshofer also initiated other business expansion activities in DM based on organic growth and acquisitions. These have helped DM to grow faster than the market and to expand into new business areas such as e-mobility and uninterruptible power supplies (UPS), as well as to better balance the business geographically. The planned acquisition of Power-One would make ABB a leading global supplier of solar inverters.

A successor in the DM role is expected to be announced soon.